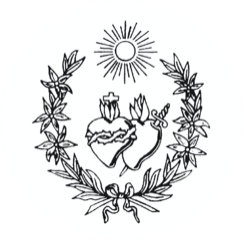 Virginia Marie Gregg Gregory passed away on February 13, 2021 at age 95, surrounded by immeasurable amounts of love and care in her residence at Chateau Madeleine, Melbourne, Florida.

A Mass of Christian Burial for Virginia will take place at St. John the Evangelist Catholic Church, Viera, Florida on Saturday, February 27, 2021 at 1:00 PM with Rev. John Britto Antony C.S.C presiding. Internment will take place on Monday, March 1, 2021 at Cape Canaveral National Cemetery at 10:30 AM.

Virginia attended high school at the Duchesne Academy of the Sacred Heart, and received a scholarship to the San Francisco College for Women in San Francisco, California. Missing her family back home; her parents, her grandmother Christina Eggers Hoffman, and her uncles Bob and Jack, she returned to Omaha to finish her schooling at Duchesne College. She was grateful for the excellent education provided by the Madams of the Sacred Heart, (Religieuses du Sacré-Cœur de Jésus) and remained a “Sacred Heart Girl” her whole life.

While at Duchesne College, Virginia took classes in Journalism at neighboring Creighton University; there she met William Hamilton Gregory, a returning WWII Navy aviator. They married soon after on September 4, 1946, and moved to Clinton, Iowa, and later Kansas City, Missouri, as Bill began his journalism career at The Clinton Herald and then the Kansas City Star.

When Virginia Gregg wed William Gregory many noted how interesting it was that a Gregg was marrying a Gregory. Virginia’s ancestry goes back to the Burness/Burns of Kincardineshire, Scotland and includes the beloved poet Robert “Robbie” Burns.  William’s ancestors were part of Clan McGregor, which included the legendary Rob Roy.  Both Bill and Gini proudly wore their Scottish tartans on various festive occasions such as the annual Rob Roy dinner and large family holiday gatherings.

In 1956, when William joined Aviation Week & Space Technology  the family relocated to Westport, Connecticut. William commuted by train to his New York City office and Virginia filled her days caring for the couple’s six children, their pleasant home and bountiful garden. Taking after her beloved grandmother, Virginia was a skilled cook, and her kitchen was always full of wonderful cooking aromas and happy conversations.  As a talented writer and painter, she also enjoyed the lively art, music and political events Westport offered; interests she maintained the rest of her life. Virginia often remarked that Westport, especially its beaches, was a wonderful place in which to raise a family and always enjoyed reminiscing about those busy, fun-filled years.

When William retired after 23 years with Aviation Week & Space Technology he continued to write, so the couple decided to travel and lived in Boston and Marblehead, Massachusetts, Green Valley, Arizona, Crystal City and Great Falls, Virginia, Satellite Beach and Viera, Florida.  They had 73 years of a happy and companionable marriage before Bill passed away in Viera on October 3, 2019.

Her life encompassed a truly iconic sweep of American history, with parents who moved off the farm, growing up during the depression and the Dust Bowl in the Midwest, and living through the war years on the home front. She raised a family starting out in the good times of the 50’s boom in the suburbs of New York and later Washington DC. Then, as many of her generation, she and her husband migrated to the south to retire, and the two of them had the time to enjoy each other’s company and travel extensively.

Virginia will be remembered for her loving devotion to her husband and family, her strong Catholic faith, her artists’ eye, her wit, energy and patriotism. She was a beautiful soul, very funny, smart, interesting, optimistic, and happy. She will be dearly missed by her family and friends.

As one of the original 200 families of St. John the Evangelist which was founded in September 2001, the Gregorys were very supportive of the beautiful new church and the completion of the outdoor grotto for prayer and reflection in honor of the Blessed Mother. In lieu of flowers, the family requests memorial gifts be sent to:  Building Fund  “Blessed Mary Grotto” , St. John the Evangelist Catholic Church, 5655 Stadium Parkway, Viera, FL, 32940  with “Blessed Mary Grotto Building Fund” noted on the donation check.

To send flowers to the family or plant a tree in memory of Virginia Marie (Gregg) Gregory, please visit our floral store.