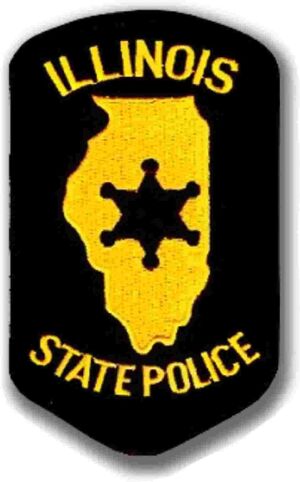 He enlisted in the Illinois National Guard in January, 1949 during high school. Because of his age, his mother had to sign, consenting for him to enlist. He served in the 5th Regiment Combat Team, in Korea, in the Punch Bowl area. During his military career he served in the Illinois National Guard, U.S. Army, and U.S. Air Force, from which he retired in 1987.

Fritz joined the Illinois State Police in 1961, his entire 30 years were served with District 15 (Illinois Tollway).  A fellow co-worker said, “Fritz was old-school State Police with his crew cut and straight-forward manner. He served as M/Sgt on the mid-night shift for as long as I could remember. He was quite a character and I’m sure we all have some Fritz stories.” Even after retirement, one of his greatest joys was attending the 20 Year Banquet, for those that had served 20 years or more with the ISP. At one point he asked, “do I get anything extra, if I have been retired for more than 20 years?” That banquet was always a special time for him and his long time friend and fellow M/Sgt. Carl Sebastian.

Fritz was very proud to tell people, when asked, that he was a M/Sgt in the Army, Air Force and the Illinois State Police. Simultaneously, he was a brick mason for over 60 years, he helped build many homes and businesses in Southern Illinois, and the Dundee, IL, area. Hard work was instilled in all of his kids along with taking great pride in the work they do.

He will always be remembered for his hugs, smiles, and gentle heart; his love and passion for his family, his faith, and his love of coffee and sweets, especially strawberry milkshakes and he never shared a phone call without a “well, you’re lookin’ good!” Angie always referred to him as “Our gift from God!”

He was modest to a fault, only upon his death that we, his family, learned of his being awarded two bronze stars for his service in Korea. In April 2019, he was able to take the Honor Flight to Washington, DC, confined to a wheelchair, and extreme pain from his arthritis, he used both arms to salute, and all of the strength he could muster to stand for the Pledge of Allegiance, for God, country, and family were the greatest things that kept him going. He was always wanting to fight another day for all of us, until the pain became so great that he asked to fight no more.

Whether you knew him as Fritz, M/Sgt. Schmelzer, Dad, Daddy, Papa, Poppy, Mr. Schmelzer, he was only too happy to sit and share a cup of coffee, or a story with you. If you had cookies, or sweets of some sort all the better. He thought the world of his wife, children, grandchildren, and great-grandchildren, and he never missed a chance to tell you all about the love he had for each of them. Each one of them hurts to know that we won’t be hearing his voice again, but thankful to know that he is no longer in the pain he has endured for so many of the past years.

Visitation will be from 9:00-11:00am ET, on Wednesday, May 11, 2022, followed by a memorial  service at Faith Viera Lutheran Church at 11:00am ET. Entombment, with full military honors, will be at Cape Canaveral National Cemetery, Mims, Florida. For those in the Dundee area the service will be live streamed at St. Peter Evangelical Lutheran Church (18N377 Galligan Road, Dundee Township, IL, 60118) at 10:00am CT.

In lieu of flowers, contributions can be made to some of his favorite charities: Faith Viera Lutheran Church, Viera, FL, St. Peter Evangelical Lutheran Church, Dundee, IL; Samaritan’s Purse Operation Heal Our Patriots (samaritanspurse.org); or Tunnel To Towers (t2t.org).

To send flowers to the family or plant a tree in memory of MSgt Frederick (Fritz) J. Schmelzer USAF Ret, please visit our floral store.